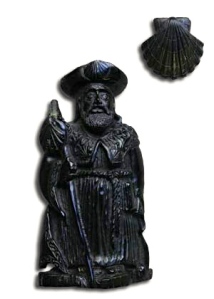 There are many familiar sites that one enjoys when spending time in Santiago de Compostela.  Walking the historic streets in the old city one strolls past restaurants, bars, and stores windows displaying this traditional and beautiful Azabache art, crafts and jewelry.  It adds to the setting to learn of the ancient craft.Azabache – “Black Jet is a fossil material from vegetable origin that is located in a few places of the planet. The one that appears in the region of Villaviciosa’s Sea-coast (Asturias), from the Jurassic, is considered to be one of the best quality in the world

Exploited for thousands of years, and due to its relative shortage and the intense and brilliant black color that it gets once polished, it was considered a magic and protective stone, and it was very valued.

It was part of the popular jewellery in Spain; it was, worked in the shape of shells and images, a symbol of the jacobeas peregrinations  along its history; the amulets most used by all the social classes in Spain were made of black jet and taken to the New World, and it was accepted surprisingly well by the diverse cultures of the American continent.” – http://www.azabachedeasturias.com

Jet – The Magic Stone Trail – article:
“They brought to Compostela pilgrims arriving for the seven routes in ancient times. Perhaps for this reason, in origin related to the pilgrimages, the jet is considered as “the magic stone of the Road”.
“Since the beginning of the pilgrimage to Compostela, all who had just got along Route Xacobea stone memories in a jet. This practice would lead to one of the most characteristic groups of artisans of Santiago.
The jewel of craftsmanship Compostela is preceded by a magical. It said it was able to cure certain diseases such as the “falls” or “scrofula” and was widely used in the art of divination, so prolific in medieval Galician and even today, that this is a country of witches. However, the jet just in Galicia and it Compostela artisans imported from Asturias.
The jet was relevant industry in the Middle Ages valued for its ornamental beauty and the magical powers attributed to him. In Santiago were located most important workshops in the pilgrims had their best customers.Artisans of jet Compostela remain excellent teachers in the art of combining this stone to precious metals, making exceptional jewelry.” – Lo Mejor de Galicia – http://www.galiciaparaelmundo.com
You may enjoy visiting: Museo del Azabache Compostela
Azabache Video Links:
Azabache – “The Magic Stone of The Road”
La ruta del azabache magico