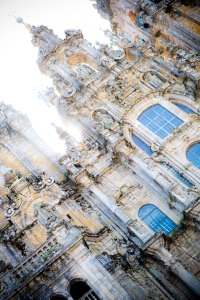 Thank you to Nikki Incandela for so many inspiring photographs and special memories of our times in Santiago during Puerta Santa 2009 and Xacobeo 2010 – You helped a very special journey begin!

Thank you to Sue Kenney for sharing the information of the La Voz Camino article – so many inspiring Camino stories to share!!!

The movie The Way and the book My Camino have had a huge impact on the increase in pilgrims walking the Camino. Here is the article in La Voz Galicia newspaper, in translated.

“Over a decade ago the St. James’ way wasn’t what it is now. It was rare to encounter Americans on “the way” and the pilgrims that spoke English would do it with a British or Irish accent. Nowadays, if you stroll around the Plaza del Obradoiro, you’ll listen to a lot more people speaking American English than British English. The reason? a movie called “ The Way”, a documentary named “Buen Camino” and a couple of books like the Canadian Sue Kenney’s “My Camino”. The 7th art is literally launching to stardom “the way” on this side of the pond and the consequences of this new trend are difficult to value. What we know is that Americans are experts on feedback, that is to say, in sharing, in telling their impressions on what they have lived, in giving advices to their fellow citizens? Something that on the other hand is a secular tradition among the pilgrims that were doing the St. James’ Way, and when they were back home will only share their experiences with others that wanted to do the same? Evidently, the way the reviews and the forums reach the public is huge in comparison, specially easy to do nowadays thanks to the new technologies. US is leading with much more advantage in this than Europe when is about the social networks, guestbooks, restaurants, when in Spain websites like Yelp, Amazon or Foursquare haven’t been used yet.

A couple of movies can be the detonator for a trend, but there must be fundamental reasons within. Why is it that so many American decide to do “St. James’? Does it have anything to do with the financial crisis?
After seeing the work of the Director Lydia Smith I have my own conclusions. Americans are incline to find themselves within, to spend time alone to think on what is going on in their lives, to experiment new things when they are against a wall in their lives, events like being laid off, losing a loved one, a live threatening illness, etc., but above all when they need to get out of the rut they are in, when they don’t want to feel that adversity is winning over. Not so long ago, Young Americans graduated incapable of finding a job would challenge themselves to hike up to Machu Picchu, or enlisted in Peace Corps, they would have a sabbatical year and travel to know other cultures, whatever it was that would give them an image of dynamism, and suddenly, thanks to a movie, zas!! They discover that they can do all this and more in the St. James’ way. Why? 1. Walking hundreds of kilometres through a historic and spiritual path is awesome. 2. The way allows you to spend time alone. 3. To say that you’ll be doing “the way” inspires curiosity and respect from others, especially when you quickly explain what it is about. 4. During the walk, you can think. 5. “The way” allows you to be in touch with nature and with people from all over the world that share something in common with you. 6. To do “the way” helps you to find yourself. 7. When you are doing fine, and other pilgrims are not, it allows you to help them, and feel that you can help others… it makes a lot of sense. ”